Skip to content
Slovenia is the only country in Europe that combines the Alps, the Mediterranean, the Pannonian Plain and the Karst. The changing landscape is constantly surprising, time and again. You can have one eye on the sea, then look in the other direction and be surrounded by high mountains. Heading up into the forests, you can see the green plains below you. From upland meadows your view stretches into river gorges. This proximity of opposites and contrasts is a hallmark of the country.

In Slovenia you can still walk through virgin forest, or watch the grapes ripen on the oldest vine in the world. You can hear tales of bears, and eat forest fruits that you have foraged yourself on a brief walk out of town. Here you can uncover the secrets of the land, and what lies beneath it. Here you are part of nature. 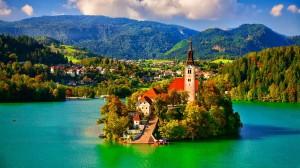 Slovenia has numerous sites of special natural interest, with features of all four main areas: the Alps, the Mediterranean, the Karst and the Pannonian Plain. It also has a wealth of diverse architecture and urban design. You can truly feel at home in Slovenia’s towns.

Slovenia is a land of greenery, which offers great opportunities for activity holidays. Its high-quality accommodation guarantees a comfortable stay. It is perfect for a summer holiday, a winter break or a weekend away.

Slovenia is famed for its excellent food, accompanied by one of its fine wines.

The friendly, hospitable and attentive locals will guarantee you a pleasant stay. You can feel Slovenia. 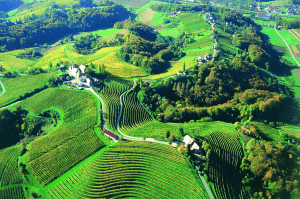 Slovenia lies in the heart of Europe, where the Alps meet the Mediterranean and the Pannonian Plain meets the Karst. This small green country measures 20,273 km2 in area, and is home to sincere, hospitable people of great diligence. It has an exceptional number of top athletes, and a wealth of cultural creativity. In Slovenia it is not difficult to compare the value of goods and services, as they are priced in one of the world’s major currencies, the euro.

Slovenia has a population of two million, of whom the vast majority are ethnic Slovenes. People hailing from the other former Yugoslav republics make up a significant minority, albeit less than 10% of the total population. The Italian and Hungarian ethnic communities have protected minority status, despite their small size.

The majority of people live in towns and cities, but a significant number live in the countryside. Agriculture accounts for only a small proportion of the workforce, while the majority work in services and manufacturing.

Slovenes are renowned as a diligent, hard-working nation, part of the reason that Slovenia is the wealthiest of the new EU members. They constantly aim to prove themselves and to progress. Their toil and persistence has allowed many Slovenes to achieve at the global level. A very good example is the country’s athletes, particularly those involved in extreme sports, from mountaineering and extreme skiing to ultramarathon biking and swimming exploits.

Slovenes are also very thorough in learning foreign languages to make themselves understood. Even primary school students can speak foreign languages. The majority of people can speak good English, while most have a good grasp of German. A large share of the population can communicate in the languages of the old Yugoslavia, while there are many fluent Italian speakers in the areas bordering Italy.

Invigorating above and below

The collision of four major European geographical units has created a very invigorating landscape, much of it thickly forested. More than a third of the country’s area is protected.

The most mountainous region is the north, where the Alps begin. The Julian Alps and the Kamnik-Savinja Alps have many stunning sharp peaks. The peaks of the Karavanke, the mountains bordering Austria, are more gentle.

Much of the east of the country between Ljubljana and Maribor is uplands, as are the areas west and south of the capital.

There are gentler hills in the south-east and east, where the vine flourishes, while plains and basins populate the areas between the hills. The Ljubljana region lies in the largest basin.

Slovenia also has a large plains area, as the east of the country is part of the Pannonian Plain.

Not only is the land surface very invigorating, there are also wonders underground: some of the country’s 9,000 karstic caves are among the most beautiful in the world.